IRDA Claim Settlement Ratio 2016-17 – Best Life Insurance Company in 2018 in terms of Claim Settlement. Claim settlement ratio (CSR) is one of the most important statistics of an insurance company,  which can give you a fair idea on how much you can trust it. The prime duty of an insurance company is to settle the claims, in a fast and prudent manner and give the insured amount to the policyholder, on the occurrence of the insured unfortunate event. Insurance Regulatory and Development Authority (IRDA) in its annual report for 2016-17, throws light on the claim settlement practices of Life insurance companies of India.

What is Claim settlement Ratio (CSR) and why is it so important?

At the end of March 2017, 62 insurers are operating in India. Of which 24 are life insurers, 23 are general insurers, 6 are health insurers exclusively doing a health insurance business and 9 are re-insurers including foreign re-insurers branches. Bifurcation between the pubic sector and private sector insurers are as per the chart given below.

The table given below can give you a fair idea on the business under written by life insurers and their market share for 2015 – 16 and 2016-17.

Along with the claim settlement ratio, operating expenses of a life insurance company is also an important factor to take care off. Lower the expense ratio, higher is the chance to receive a better bonus rate for insurance policies.

IRDA Claim Settlement Ratio 2016-17 or up to 31st March, 2017 is shown as a chart here. Colour codes are used to understand the ratios easily. Green colour is provided for best performance while red is used to denote worse performance.

As there is of data in the above info-gram, let us break it into small aspects to understand it in a better way.

Claim Settlement Ratio 2016 – 17  based on the number of policies 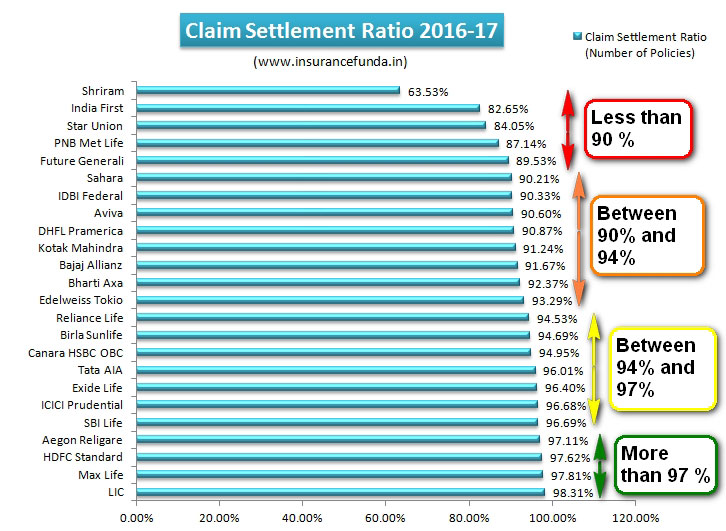 If we decide the insurers based on the above data only, the best insurers will be (1) LIC (2)Max Life (3)HDFC Standard (4) Aegon Religare and (5) SBI Life. 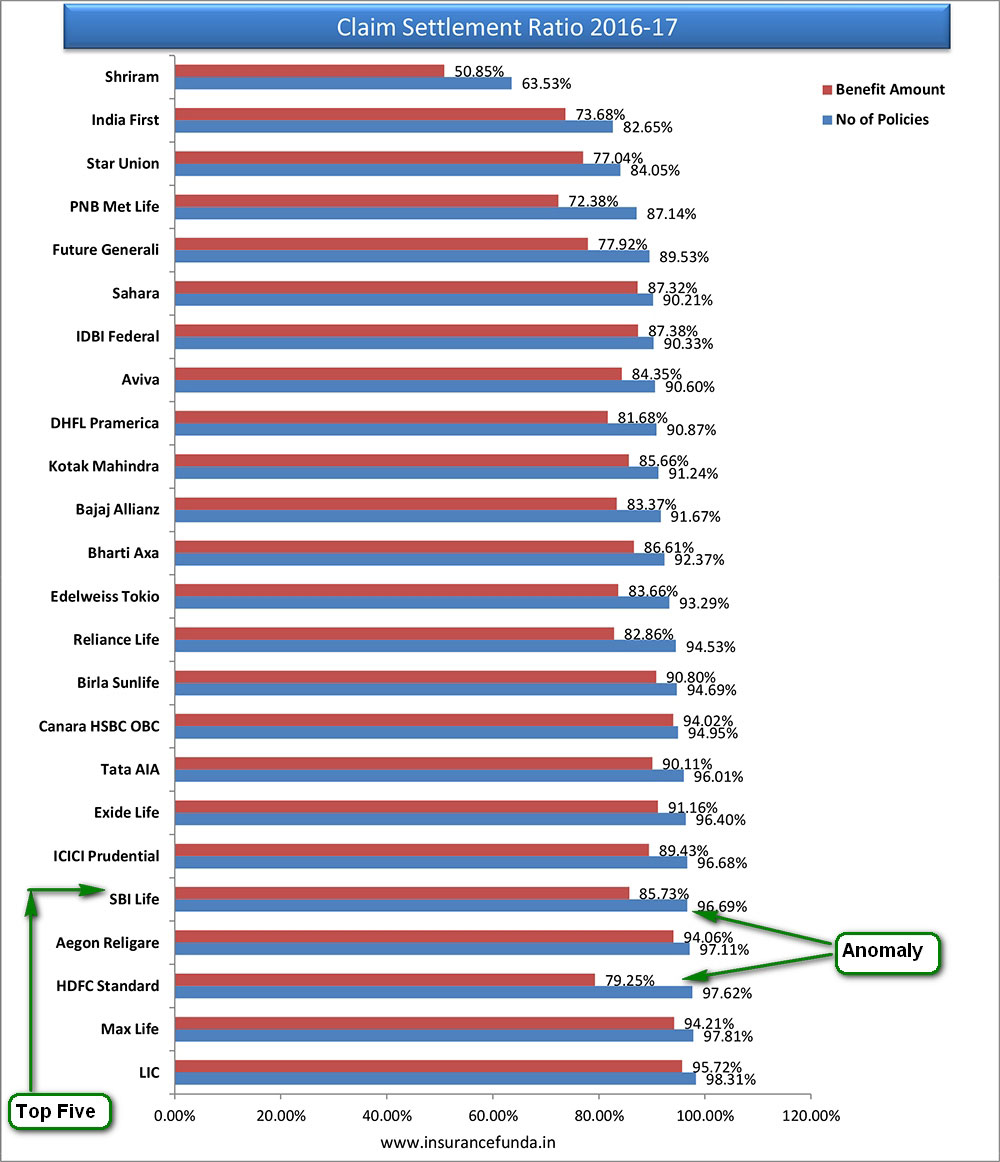 When we analyse the top five companies we can easily detect an anomaly in case of the two insurers namely HDFC Standard and SBI Life. Even though the claim settlement ratio based on the number of policies are fairly high, the ratio based on the benefit amount shows very low values. What we can understand is that there is a difficulty in settling high sum assured death claims in both of these companies.

If we analyse the above table we can find similar anomalies with other companies also. As the info-gram is self explanatory there is no need to explain it further.

Conclusion: As the prime motive of taking an insurance policy is to get the claim amount on the occurrence of the insured unfortunate event, it is always advisable to select your insurer wisely. Claim settlement ratio must be analysed based on the ‘number’ and ‘benefit amount’ to get a complete picture. Life Insurance Corporation of India which is the only public life insurance company, tops the chart and remains the most trust worthy company in both the counts.