LIC Bonus Rates 2017-2018 | Bonus Rate Charts-old and new plans. Life Insurance Corporation of India (LIC), the largest insurer, and the only public sector life insurance company in India has recently declared the bonus rates for the valuation period from 1st April, 2016 to 31st March, 2017. Bonus rates are the rates at which life insurance companies provide additional returns to the traditional policy holders. So it is always advisable to track the bonus rates declared by the company.

Normal bonus rates are declared as Simple Reversionary Bonuses in LIC. This means the bonus rates will not be compounded. Bonus rates thus declared shall be applicable for 1000 Rs. Sum Assured of the respective plan for the particular year.

The bonuses thus declared for all the years till the maturity of the policy will be added together at the time of maturity to find the simple reversionary portion of the maturity returns.

You can calculate the maturity returns of your policies using Maturity Amount Calculators of LIC policies as per the latest bonus rates.

Simple reversionary bonuses are declared every year and are added to the policy account, as and when it is declared. On the other hand, Final Additional Bonus (FAB) is a one time additional bonus which is paid along with maturity of participating policies. Please note that Final Additional Bonus (FAB) is paid only once in the policies, resulting into claim, by maturity or discounted claim (Surrender of policies with one year preceding the date of maturity) or death claim.

Latest bonus rates of new plans (which are open for sale now) of LIC of India is provided here. The bonus rates for the year 2016 – 2017 is also provided to enable comparison. 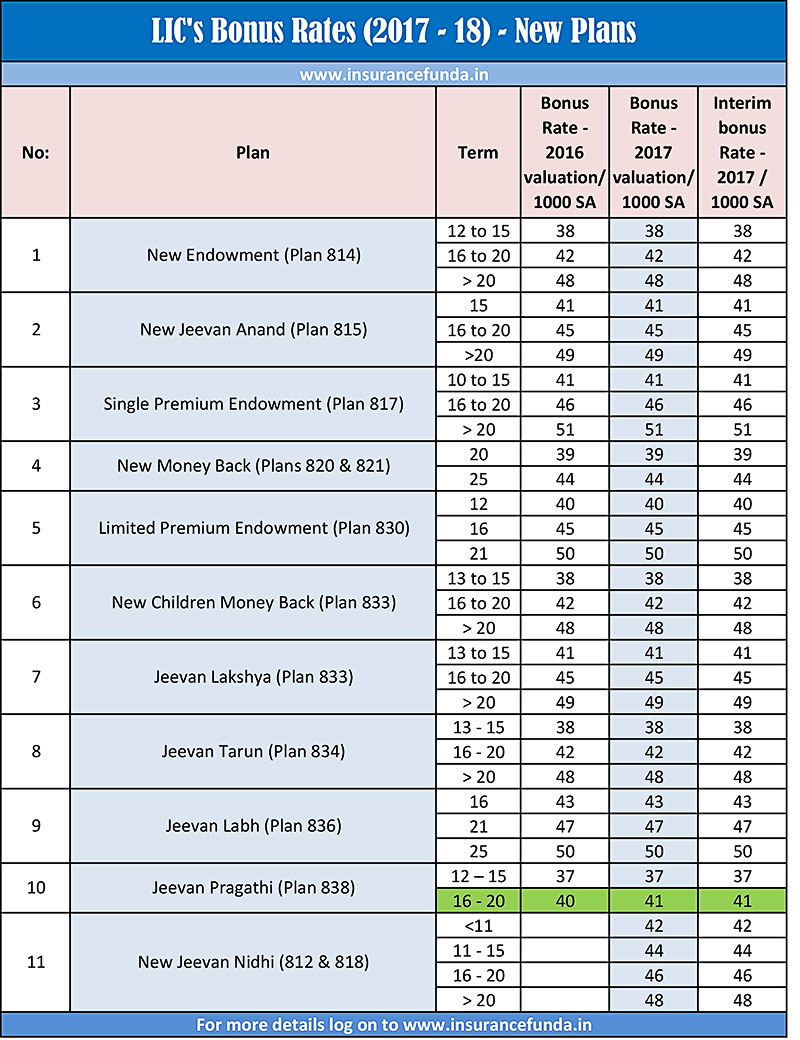 The bonus rate chart for withdrawn plants are given here. You may recall that all the insurance plans were withdrawn on 31/12/2013. Plans were restructured and relaunched later from 1/1/2014.

One Important point to note is that the bonus rates of Jeevan Nidhi (Plan 169) has been increased for all the four term ranges.

Of-late, the financial market in India has been showing a continuous trend of reduction of interest rates. There were several instances of interest rate reductions in the past financial year itself. With this back ground, when we analyse the the declared rates, we can see that previous year bonus rates are maintained in all the policies. Two policies showed a marginal increase in rates also. This is a commendable achievement for India’s largest public sector insurer.

Interim bonus rates of LIC- When it is paid.

The interim bonus rates for the year 2017-2018 is shown in the chart. Generally the interim bonus rates are same as the normal bonus rates as far as LIC is concerned. Interim bonus rate are applicable to policies in respect of each policy year, entered upon, after 31/03/2017 and result into claims, by death or maturity (including those discounted within one year of maturity) or are surrendered during the period commencing from 01/01/2018 and ending 9 months from the date of next valuation. 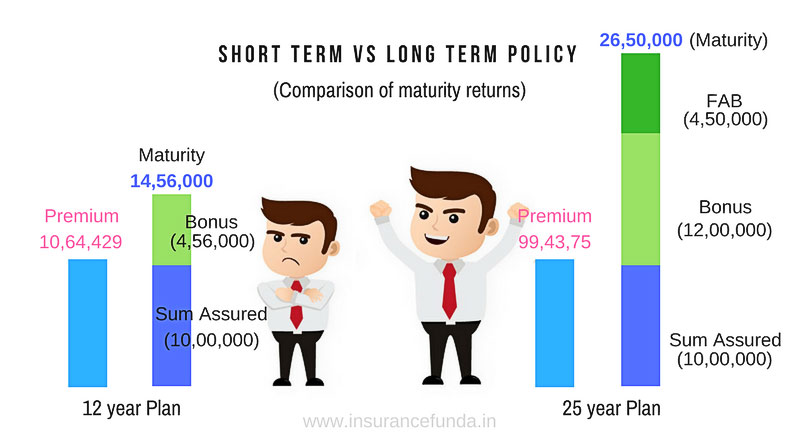 If you go through the chart given above, you can see that the higher the term, the final additional bonus rates increases dramatically. FAB rates are dependent on Sum Assured of the policy also.

The chart given above (LIC Bonus Rates – FAB) is applicable to endowment type of Plans. LIC has divided other plans into various groups based on their nature and separate charts are provided for each group. If you want to know the Final addition bonus rate of a particular policy, it is advisable to refer to the complete circular which is available here.

Certain plans like Jeevan Shree (151) and Jeevan Saral (165) have a specialised bonus structure. For such plans no simple reversionary bonuses are declared. Instead one time bonus with the name Loyalty Addition (LA) becomes payable for the policy at the time of maturity as per the valuation of the plan.